Hello everybody, I have another interview with a mighty book reader/reviewer/author, he has the physique of a Marvel superhero and the head of a supermarket watermelon, a proper round one, not one of those silly Japanese square melons, please welcome Jack CJ Stark, he who is not a square! 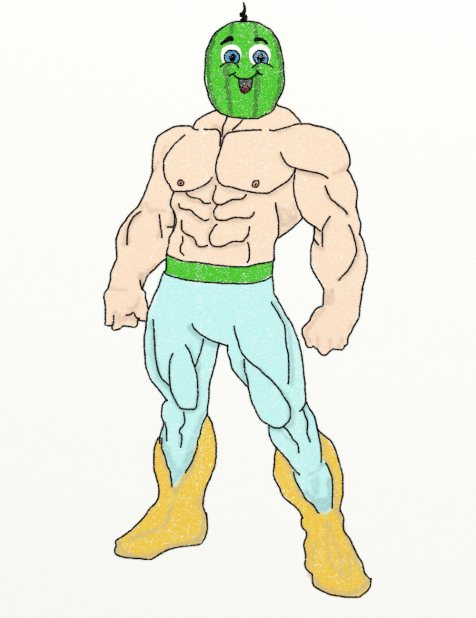 Before we start, is there a back story we need to know about the melon?

Are you willing to share this backstory with us?

Q1: Here is the most important question to ever get asked of a fruit/man hybrid: Gnomes! Are they heroes or Villains? Also, what year do you think they will take over the world?

Aren’t we all just heroes and villains simultaneously? Yeah, that’s right, I answer a question with a question. You’re welcome. You know what they say, when somebody does something sometimes I like it and then they are my heroes but if I happen to not like it then they are my mortal enemy and therefore the villain because I’m my own biggest hero. It’s a popular saying in my town. The Gnomes took over in 1996.

Q2: What is your favourite book and why?

In no particular order:

1. The Ocean at the End of the Lane by Neil Gaiman.

b. anemogram. by Rebecca Gransden.

These books all contain a similar theme. A young child discovering new things or experiencing life changing events. They all explore the themes of life being more than what it initially appears to be, and of hidden truths that are not known by the masses. They are all a bit mysterious in parts and leave the reader with questions. They are stories that give back the more you put in to them and if you can read between the lines, they explode into being very deep, meaningful, and heartbreakingly bittersweet.

I’ve only read anemogram. from that list and your description there is spot on for that book.

Q3: If your life was to be made into a book who would you want to write it?

Queen Elizabeth the Second, by the Grace of God Queen of this Realm and of Her other Realms and Territories, Head of the Commonwealth, Defender of the Faith. They say everyone has one good book in them, and I think this is the story for her.

I once got a papercut from a hardcopy book. It was on that day that I realised they are out to kill us all. Climate change, nuclear war, famine, asteroids – they are nothing compared to the dangers that paper brings to our people. Therefore, kindle and audio, at the same time. I’m such a modern age geezer that I just can’t get enough of this newfangled technology. Hashtag save the cheerleader, hashtag save the world.

Q5: If you were to stalk an author, who would it be and how would you go about it?

I plead the fifth! Purely theoretically, hahahaha, Queen Elizabeth the Second, by the Grace of God Queen of this Realm and of Her other Realms and Territories, Head of the Commonwealth, Defender of the Faith, in order to ensure she is getting the details right. I would do it by dressing up as a corgi and infiltrating Balmoral. It’d be the final chapter of my biography.

Haha, what a plot twist!

Every good story has a plot twist. DOUBLE PLOT TWIST: I am her maj.

Q6: If you could become any character from a book who would you be and how would you alter the story?

I would become Oyster Boy from The Melancholy Death of Oyster Boy & Other Stories by Tim Burton, and I would escape to sea before I got eaten. SPOILERS! Soz.

Keep Clean and Tidy Up. It was about a bee, and some other insect bug of some kind that cleaned up public parks and taught kids to look after their environment. I lost it one day when I threw it out of the car window.

So you didn’t learn a thing from the book?

I learned. It’s just, nobody tells me what to do.

Q8: I see you have a book called Creases, in your opinion how does that compare against such classics as The Bible, The Art of the Comeback by Donald Trump and the Twilight series?

Check you out with your shameless plugs just smoothly inserted there. It was like watching Graham Norton at work. I am in awe! I think Creases has the potential to be even bigger than The Bible. Creases has been read by at least 7 people, so NYT bestselling list here I come! It isn’t as complex as The Art of the Comeback, but nothing could compare. It’s a good book. Great book. Best book. I think I invented the word book when I wrote Creases. I don’t know, I’ve never heard anyone use the word before then. And the Twilight series is just the pinnacle of excellence. Without a doubt, it is the standard that I actively work to achieving one day. When I get there, I can retire. Deep in the knowledge that nothing could be better.

Q9: You have been tasked with rewriting Fifty shades of Grey, what would you change from this almost perfect book, only second to Creases (Another plug there, Mr Norton could learn from me)?

I would up the smut. Hashtag UpTheSmut! There is nothing my aro-ace heart loves more than very explicit sex. I would also rewrite the exact same story told from Mr Grey’s perspective, because that is how we can introduce equality into our society. Also, I’d up the age of the characters by 53 years because then it would be extra hot.

Q10:  Now is your chance to make a demand of all the many authors who will read this blog…What story would you like to see written?

Oh, that’s a hard one (… she said!) Wink. No, you grow up! Have you heard of the book, The Very Hungry Caterpillar? Of course you have, it’s a classic. It’s full of colours and pretty things. That book taught me that I can eat everything in sight, and I will just get fat, but then I’ll go to sleep one day and when I wake up, tada – a thing of beauty! This book is irresponsible and sends the wrong message. It’s a scourge on society! Because, get this, that’s not how it works for us humans. IKR! I was shocked too when I found out. So, I’d like to protect the children of the future and demand we burn The Very Hungry Caterpillar and have it rewritten by more responsible authors where the caterpillar ends up with Type II Diabetes and has his limbs amputated. Kids gotta learn the hardships of life. It ain’t all rainbows and butterflies here in the real world and it’s about time we started taking this seriously. Thanks, Obama.

I’d like to say thanks to Jack for taking part in this experiment.  Remember folks to keep an eye out for the biography of Jack “I like melons” by  Queen Elizabeth the Second, by the Grace of God Queen of this Realm and of Her other Realms and Territories, Head of the Commonwealth, Defender of the Faith. If you want to follow/stalk him then you can find him on Twitter and be sure to check out his awesome blog.

This is a text widget, which allows you to add text or HTML to your sidebar. You can use them to display text, links, images, HTML, or a combination of these. Edit them in the Widget section of the Customizer.
Book Reviews Cassidy's Reviews Cover Reveals Excerpts Gnomes Interviews Uncategorized
Loading Comments...
%d bloggers like this:
%d bloggers like this: