Hello everyone.  Would you believe it, in the last interview Arthur Graham stripped down to his undies and showed the world his hairy body,  after that I thought, nooooo way is anybody else gonna wanna take part in this madness but nope there was one brave/insane soul.

Welcome to Madeleine Swann, Queen of Tea Parties, a person that writes and also owns clothes.

Question 1: How are you handling the lockdown? What’s the most exciting thing to happen to you so far.

Well, I just got a subscription to Shudder and Hayu, so now I can watch The Real Housewives of New York all day while Bill slowly despairs

Task 1:  (Testing artistic skill) Now, I know you are a massive fan of unicorns, at least that’s what it told me in the Madeleine Swann Haynes manual I got off of ebay.  So either re-create or draw a unicorn tea party.

Question 2:  For those trapped inside recommend 1 book, 1 movie and 1 album.

Everyone needs cheering up so you should read The Midnight Pals. It’s funny, easy, and there are pictures 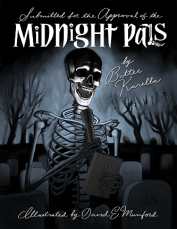 For a film I recommend Fateful Findings by Neil Breen. You’ll thank me

The album I can’t stop listening to are my favourite songs by Doja Cat. When I really like an artist I tend to gather my favourite ones from their albums and sod off the rest. I think Bill knows all the words to So High by now

Task 2:  (Testing athletic ability)  I have been told nothing too athletic, after that one-armed press-up saga my doctor said the next time I try anything like that could result in a diet for me.  So something more sensible will be done this time….How fast can you eat 4 biscuits?

The rules for this challenge are:

Madeleine has recorded her attempt:

Using one of my inventions the Biscuit Enabler, I managed to eat 3 in 0.17seconds…One spun out of control and ended up in my eye.

Question 3:  As you are a writer, you got any good ideas for a quarantine story?

The flash fictions have been leaking from my ears since this all began. They’re all quite different, some apocalyptic but I like to keep things small. I prefer just a few characters relating to each other sometimes over big event stories.

Task 3:  Madeleine is to decide on a task, carry it out and challenge me to best her.

Ok, do I have to carry it out now? I shall see how many things I can balance on my remote control.

Clever having a remote at the top and the bottom, just incase the world somehow flips upside-down.

Here be my attempt:

Question 4:  There have been a lot of crazy conspiracy theories about this virus, create a new one now, let us spread it on social media and see how long it is before breakfast news or Trump mentions it. (so far he has ignored all attempts to trick him)

Ooooh  that’s a good one,  a nice sensible conspiracy theory and you also make sense of Don Quixote at the same time.

Question 5:  What’s the thing you miss most about life before the lockdown and what’s the first thing you’re gonna do when we are free again?

Thank you Madeleine for taking part in this interview it was fun, especially trying to balance an open book on a remote control with a curved bottom.  🙂