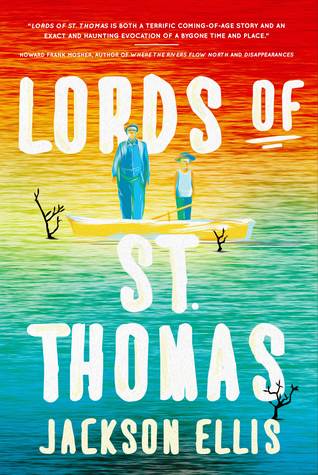 What da cover says:  In the Mojave Desert, at the southern end of the isolated Moapa Valley, sat the town of St. Thomas, Nevada. A small community that thrived despite scorching temperatures and scarce water, St. Thomas was home to hardy railroad workers, farmers, shopkeepers, teachers, and a lone auto mechanic named Henry Lord.

Born and raised in St. Thomas, Lord lived in a small home beside his garage with his son, Thomas, his daughter-in-law, Ellen, and his grandson, “Little” Henry. All lived happily until the stroke of a pen by President Coolidge authorizing the construction of the Boulder (Hoover) Dam. Within a decade, more than 250 square miles of desert floor would become flooded by the waters of the Colorado River, and St. Thomas would be no more.

In the early 1930s, the federal government began buying out the residents of St. Thomas, yet the hardheaded Henry Lord, believing the water would never reach his home, refused to sell. It was a mistake that would cost him―and his family―dearly.

What I says:  What a cracking good story!  The book starts off with “Little” Henry now an old man reading a news report about the waters of a lake receding to reveal a town that had been buried beneath.  This sends him and the reader back on a journey into his childhood to a town called St. Thomas where it’s population is being forced out of their homes to make way for a new lake.  Henry’s Grandad refuses to believe that the water would reach his house and doesn’t moved out.

The incredible writing starts off slow and steady matching the water’s pace as it gets closer to St. Thomas, gradually picking up speed as the water gets nearer.  The closer the water gets the darker the story becomes, with the family getting hit with more and more tragedy.  The relationship between Grandad and grandson has been written with such great care, you can’t help but feel for them.  You know how the story is going to play out yet it still hits you hard when things play out as expected.

Some interesting photos have been added at the end, photo’s of the remains of buildings that inspired this story, makes you wonder just how much of this was true.  If you fancy reading a well written story that has the slight possibility of being real then this is the one for you.

This is a text widget, which allows you to add text or HTML to your sidebar. You can use them to display text, links, images, HTML, or a combination of these. Edit them in the Widget section of the Customizer.
Book Reviews Cassidy's Reviews Cover Reveals Excerpts Gnomes Interviews Uncategorized
Loading Comments...
%d bloggers like this:
%d bloggers like this: