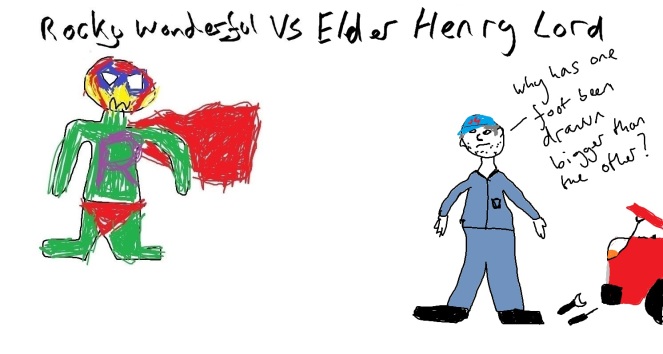 Hello everybody, I have another interview with a character from a book, this time the book is Lords of St. Thomas by Jackson Ellis which I recommend you give a read because it wonderful book.  Today I am interviewing the elder Henry Lord

Q1. Hello Henry, How are you today?  Let’s start off by talking about St Thomas.  Can you give us a run down on what the town and it’s folk were like.

It was a small community, and tightly knit. That’s a necessity in the desert. You have to lean on one another, whether for help in the home or out in the fields. I ran the town garage, but spent a lot of my days in the cotton fields and orchards along the Muddy River, as well as working on the railroad, which came into the western part of town. It made a big difference to us, finally having that railroad to deliver provisions and livestock. The character of the town changed drastically when the government came into buy us all out. A lot of good, hardworking people were forced off their land. They didn’t want to leave, but looking back now, what else could anyone do?

Q2. How did you meet your wife and what was she like?  (One thing I felt was missing from the book)

I met Ann long ago in church, when I was a young man and still observant. She was sweet, and strong…and stubborn. Had she lived long enough, I’d like to think she would have been right by my side when I turned down the government’s offer for our property.

She enjoyed reading, too. It was because of her that I learned to love books.

Q3.  Have you always stayed in St Thomas?  Ever been travelling?  If you haven’t been abroad where would the ideal holiday destination be?

Never travelled much beyond the Moapa Valley. No need. St. Thomas is my paradise, I never wanted to leave, and if I had to do my life over again, I’d do it the same way.

Q4.  Seeing as you are a character in a book, if you could jump ship and join another book which would you choose and how would you alter the story?

Noel Lord (from Howard Frank Mosher’s Where the Rivers Flow North) and I would have made one heck of a team. Not sure I would have made much of a difference in his story, nor he in mine, but we would have raised a little more hell together.

Q5. Here’s a question from Abbygayle, aged 7,  from Upper Twatton. “What did you do when you was a kid?  It must ‘ave been totes boring not to have Internet and books an all that.

School, church, helping around the house and in the fields, fishing and playing ball — plus trying to stay cool despite the desert heat — didn’t leave time for much else. We did have some books. What is the Internet?

OMG!  You don’t know what the Internet is?  It is sooooooo amazing.  You can do so many useful things like watching people pop pimples and Japanese girls eating ice. You can find out what the weather is doing outside if you can’t see the window.  This boy at school told me about this video where two girls do something with a cup but I’ve not seen it yet.  You really should check it out, it’s really cool.

Q6. Could you explain your reasoning behind not selling the house?  Did you have a theory on why you thought the water wouldn’t reach your house?

Looking back, it was wishful thinking on my part. I had no theory, no idea whether the water actually would or would not reach my home.

But you know, if I sold the house, that was it. Whether or not the lake flooded my land, I’d be out either way. If I refused to sell, I at least had a chance to stay on my property. And remember, I did stay on my property for another full 10 years before my home was flooded. That water had to travel 70 miles before it reached me…and I still can’t believe it happened.

Q7. Could you give the readers a book recommendation to sit on our fake library?

Roughing It by Mark Twain, one of my grandson’s favourite books. It has some great stories that take place in the Territory of Nevada during its early existence.

Q8.  How proud are you of young Henry and what he did with his life?

I couldn’t be prouder…wish I could have stuck around a while longer to see more of it. But I’d say that no matter when I passed.

Q9.  Describe the perfect meal.  Include food, setting and company.

Anything fixed by my wife. She would be there, as would my son, Thomas, my daughter-in-law, Ellen, and my grandson, Little Henry. It would be back home in St. Thomas, just as if nothing had ever happened.

Q10.  Normally I have a question about President Trump at the end, instead this time it will be about President Coolidge.  If Coolidge was to turn up at your garage with car troubles what would you do?

I’d service his car as I would for anyone else. I’d do my job well, and I’d offer him the same price I’d offer anyone. I’m a businessman, and like anyone worth his salt, I pride myself on quality and fairness.

I wouldn’t shake his hand though.

I would like to thank Jackson Ellis for playing the part of his character, it has been great fun.  I do recommend you give Lord’s of St. Thomas a go, you can find info on Goodreads and Amazon.  Also check out Jackson’s Website and follow him on Twitter.